As with all contour garments, mens underwear needs to be cut with comfort paramount. Seams, gussets and panels need to be precisely placed for maximum comfort. The contoured pouch needs to be just the right shape and size.

Most mens underwear is cut with a 1/4″ (.7 mm ) seam allowance, whether they are just overlocked, or flatstitched. Hems are normally 2cms wide.

Mens stretch underwear encompasses a variety of  garment types.  Those styles include :-

There are  many variations in mens underwear design. Boxers may have an encased waistband with a fly opening, or a sewn on elastic waistband without a fly.

Modern briefs generally have a contour pouch with or without a centre front seam. Or they may have a traditional crossover fly.

There are a few recognised brands such as Calvin Klein, Jockey and Sloggi that have a large part of the market, and there have been a number of established designer brands jumping onto the band wagon.

There is a lot of room for small startup brands to establish their own line. It is often in  these niche markets, rather than in general fashion where the greatest potential for success lies within the clothing industry.

There is far less competition and the amount of money required to bring to market a mens Boxer brief is considerably less than for a shirt or a jacket for example. As long as you can find a factory to produce small orders.

Because the garments are relatively compact they are cheap to make , store and transport. The potential for problems are also lower than for general fashion.

Most large underwear factories will only produce underwear, in contrast to most normal garment factories that will produce a wide range of types of garments.

It is not advisable to have a normal clothing factory make mens underwear as special machinery is required, notably flatstitch and coverstitch machinery.

Flatstitch is essential for many types of underwear and sportswear construction. It is a seam that joins two pieces of fabric together by butting the two edges together and oversewing  with a zig-zag stitch.

This  allows the seam to lay flat, providing more comfort for the wearer. It also provides for high seam elongation, which means it can be stretched without breaking.

Coverstitch hems are  used extensively  in underwear and sporstswear. It provides a professional finish for raw seams, allowing for a great amount of stretch to hems without breaking the stitching.

The coverstitch gives a twin needle top stitch finish on the outside, while covering the inside fabric edge with a zig-zag overlock stitch.

A bulk thread is often used to provide more comfort and greater coverage. This is a wooly thread that fluffs out

While we do not normally advise Clients to use offshore production, this is one area that could be an exception if there are fairly large quantities involved.

We would still always advise using U.K. production to begin with though. The approach that we would recommend for startups, is to use low volume  domestic production initially.

This approach may cost more, but provides a less risky way of finding out how the process works. You can then progress to offshore production when you are ready.

There are  three main types of waistband used in mens underwear production :-

Sewn inside the waist so that it appears to be encased, but the elastic is exposed.

Sewn on elastic. This is often knitted with a brand logo.

Apart from the obvious function, a fly  adds some shaping, and  an element of design to mens briefs. It also aids in shaping the area.  There are three basic type of fly – The standard vertical fly, the horizontal fly, and the Y-front fly. 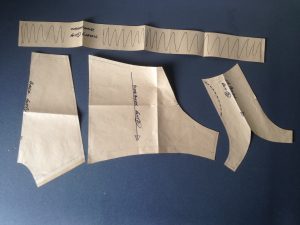 If you are interested in starting your own line in mens underwear, or if you are already established, we would suggest looking round at  existing styles and in magazines. Get together a few ideas and if necessary purchase some garments that you like.

These can be used as a basis to make your own styles. Although it may be regarded as “cheating” it does help to prevent trial and error.

Make some rough sketches of what you want, along with any necessary information, then give us a ring and we will try to help produce your garment.

We can help you at every stage of the way, from the initial concept, design,sourcing fabrics and trims, pattern making, sampling,  through to production. If you just want some advice or mentoring, then we can help you there too.

Sleepwear for men is an expanding sector in menswear. There are two basic catagories of mens sleepwear : Woven and stretch. Woven styles can normally be made in just about any factory with basic machinery.

It is possible to make rough mock-ups using standard machinery, but these wont have a professional finish and wont have so much stretch. They could be acceptable as a first sample though.

Mens underwear purchasing has long been thought to be a barometer for wider economic performance throughout the economy as a whole.

When the bottom falls out of the underwear market, then you can bet the economy is going to follow not far behind.

The Men`s Underwear Index (MUI) was used by Alan Greenspan in the 1970`s to forecast future economic developments.

To completely contradict Greenspans economic theory – In recent years there has been a massive  increased demand for mens underwear and loungewear.

Despite this extra demand, there are very few specialists in mens underwear pattern making in the UK.

Often these new businesses have to get their patterns made by a non-specialised pattern cutter and sample machinist.

Then the production is done by ordinary factories without the specialist machinery necessary to make the garments correctly.

This all adds up to make the final product extremely poor. And the last thing that you want to be made this poorly is underwear. The patterns, the fabrics,the threads, the trims, and the construction all need to be perfect.

You cant make mens underwear using normal seam construction, or using poorly cut patterns, because they would be extremely uncomfortable.

Sportswear and underwear are closely related products and many sportswear items are now worn as underwear. Much of the specialist machinery used to make sportswear is also used for mens underwear, as both clothing types have similar functions and requirements.

While my background has been mainly in tailoring and outerwear pattern cutting and sampling, I find that underwear, along with sportswear and swimwear, is an interesting area to explore .

We offer a concise   1-1 Startup workshop for anyone who is thinking of starting a mens underwear brand, or is just starting out. The workshop provides an immense amount of information and tips. It  can be conducted face to face, or via Skype. Please ring for details.